Thanks To Cav Fans: Plain Dealer Selling Like Hotcakes 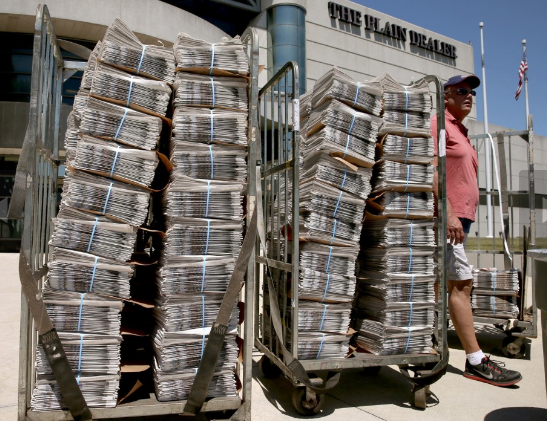 Fans who want to save as well as savor the Cleveland Cavaliers' NBA championship are keeping presses rolling at The Plain Dealer -- and keeping traffic backed up for papers. 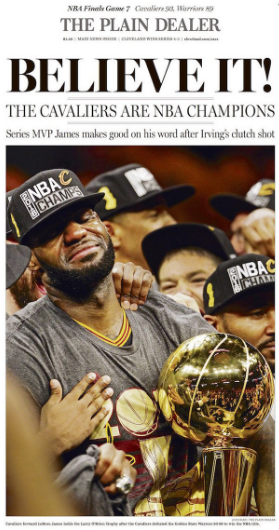 Crews went back to work to print an extra 100,000 copies of Tuesday's newspaper around 11 a.m. after the early press run sold out.

Almost half a million copies of Monday's editions were printed to restock sold-out store racks.

Two editions of Monday's paper were printed Sunday night after Game 7. The first edition has the banner headline "Champs." The second edition carries the banner "Believe."

Both the Monday and Tuesday editions are being sold at The Plain Dealer's production and distribution plant. Customers and workers reported waits of as long as 30 minutes Tuesday morning.

The papers are being sold at the regular cover price of $1.50, and no limit is being imposed.

A separate, 40-page commemorative section will be included in Wednesday's editions of The Plain Dealer. Home-delivery customers will get the edition as usual, and  "we'll be bumping the press order to about 350,000 for single-copy demand," Bowman said.

Monday, Tuesday and Wednesday Plain Dealers newspapers and the commemorative special sections will be sold Wednesday at the Tiedeman production facility from 6 a.m. to 3 p.m. Plus Wednesday is a home delivery day for the Plain Dealer.

Sellers on eBay have been asking as much as $39 for copies of Monday's newspaper. A Plain Dealer eBay selling point, offering shipped copies for $9.99, is currently down.