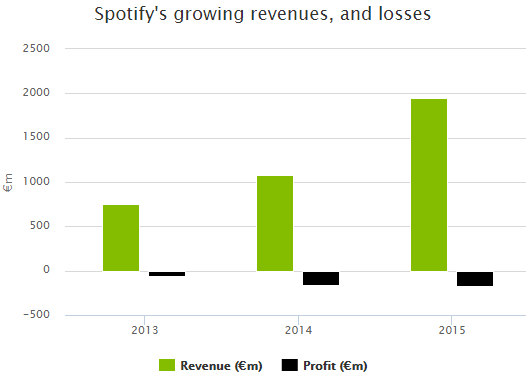 Spotify has confirmed that it has more than 100M monthly active users on its music streaming service today.

Based on its last count, the Swedish company is adding 1.8m users to the service monthly, and 30percent of users are paying subscribers.

The Telegraph reports the news comes as Spotify overtakes Skype as the most highly valued European startup, worth roughly $8.5bn, according to tech investment bank GP Bullhound.

According to a recent filing, Spotify's revenues rose 80 per cent last year, bolstered by their growing number of paying subscribers of which there are roughly 30m.

Despite the rising revenues, Spotify's losses rose by 10 per cent, prompting questions about the sustainability of its business model.

Launched in 2008, Spotify is now the biggest streaming service in the world and is credited with reinventing the music industry by replacing pay-as-you-go downloads with a monthly subscription service for unlimited listening.

It faces tough competition from Apple's Music service, which had passed 10m subscribers within six months at last count.