Here's How Voters Find News About the Presidential Campaigns 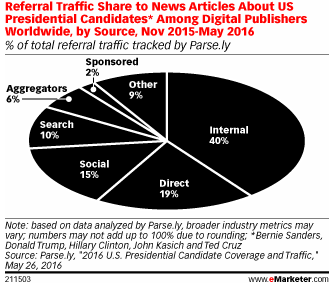 Much of the referral traffic to news articles about US presidential candidates is internal, according to data analyzed by web analytics and content optimization software provider Parse.ly. Indeed, 40% of traffic was from users who arrived at a post by clicking a link from somewhere else on the publisher’s site, report eMarketer.

Parse.ly analyzed referral traffic to news articles by digital publishers around the world about US presidential candidates Bernie Sanders, Donald Trump, Hillary Clinton, John Kasich and Ted Cruz between November 2015 and May 2016. The largest portion of referrals were internal, and no other source came close.

About one in five article views were direct—which could include dark social shares or clicks from other sources without tracking available. The No. 3 source of traffic was social media, which provided 15% of referral traffic to stories about the five major candidates for the Democratic and Republican Party nominations for president.

Just 10% of traffic, meanwhile, came from search, and a tiny 2% was sponsored.

Regardless of traffic source, news articles may not be the most persuasive way to learn about these candidates. Separate research from YuMe found that many internet users find TV news to be the most effective political marketing channel.

In fact, about six in 10 (61%) are most affected by political TV shows other than news programs. While it seems TV is the best channel to get political messaging to US internet users, there’s one exception to that rule—actual TV ads, a traditional and long-standing platform for political advertising, failed to find favor with internet users, only 42% of whom said the channel is most effective.
Posted 3:38:00 AM