For Donald Trump, one media feud is winding down -- and an old one is heating up. 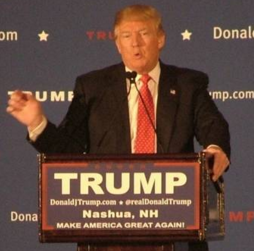 At a campaign event on Friday in Nashua, New Hampshire, Trump defended his decision to skip the previous evening's Republican debate on Fox News. But the GOP frontrunner expressed no ill will toward the conservative cable news channel he had spent days criticizing.

"You know, I don't know how you feel about this, but I have to do it. So, you have a newspaper up here, 'The Union Leader,'" Trump said, drawing boos from the crowd. "Do you know about this newspaper?"

"This guy's a bad guy. His name is Joe McQuaid," he continued. "He's a bad person, and he uses his weight, pushes his weight around, thinks he's hot stuff."

CNN reports those were among the tamer insults. Over the course of a nearly 10-minute diatribe, Trump called McQuaid "a psycho," "loser," "liar" and "dirty dog."

Trump has spent the last month assailing McQuaid on Twitter and in interviews. McQuaid has responded with editorials calling Trump a "con man" and "a schoolyard, rich-kid bully."