“… I’m gonna count the rockets for ya. I’ll give the final count on the hour.”

Courtesy of Airchexx,  This is actually an audition personality Gary Gears recorded at the AFVN (Armed Forces Vietnam Network), studios in Saigon.

The recording was made to send to KQV Pittsburgh.

According to another AFVNer, Paul Bottoms, what you hear is not really represented of what US troop heard in-country.  First of all, AFVN 540 AM did not use reverb and talent had to identify themselves with the service branch and rank.   Never-the-less, the recording is fun to hear and it worked! Gary Gears got the KQV gig upon returning stateside.

Listen for Lots  of PAMS jingles, reverb (at times)… and notable, Gears mentions toward the end of this recording that he could swear he just heard missiles go off outside. 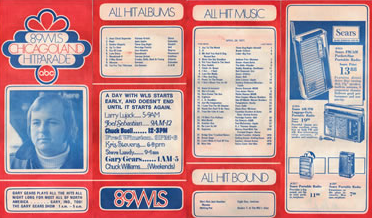 He came to in his early 20s and became a disc jockey for radio stations WLS, WCFL and WIND.  He was also the voice of WLS-TV for a time and simultaneously recorded announcements and station identifications for Radio Moscow and Radio M, another Soviet station; for the British Broadcasting Corporation (BBC); for Radio Luxemburg`s English language program; for a program from Ireland, Atlantic 101; and for an Italian radio station in Milan.