When looking at the ten most popular Current Events and Global News sites, each saw month-over-month growth in their audience, as is often the case between December and January. 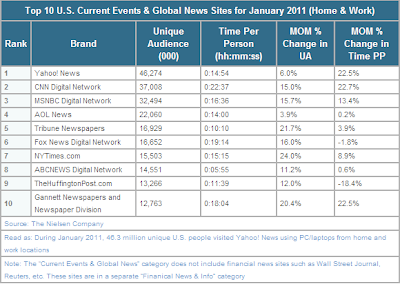 According to The Nielsen Company, Yahoo! News was the top site in the category with 46.3 million unique U.S. visitors, up 6% from December 2010. Yahoo! was followed by CNN Digital Network (+15%) and MSNBC Digital Network (+15.7%), both with double-digit gains in visitors.

Although the Huff Post is now part of the same stable as AOL News, there was already some overlap amongst their audiences. In January 2011, 27% of US visitors to AOL News also visited Huff Post, while 44% of visitors to Huff Post also visited AOL News in that same month.
Posted 2:24:00 PM