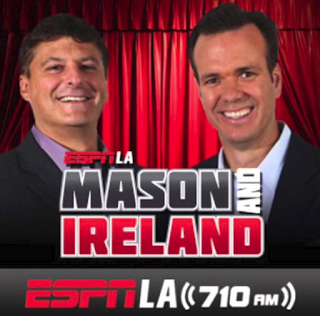 “Mason and I always say that to succeed in life, you need talent, a strong work ethic, and most of all, luck,” said Ireland. “We feel extremely lucky that ESPN is allowing us to continue with the show.”

Mason added, “It’s a privilege to work at ESPN and it’s an honor to be the OG of sports talk radio in Los Angeles. Special thanks to all the program directors that have worked with us. Can’t wait to meet the next one (after the current guy).”

“We could not be more excited about the fact that Steve and John will continue with ESPNLA for years to come,” said Scott McCarthy, vice president and general manager of ESPNLA. “While the two of them are singlehandedly responsible for the lion’s share of my high blood pressure, they are the best in the business. It’s amazing, and incredibly rare, to see a radio duo delivering their highest numbers ever after 25 years together.”

Steve Mason is a former host of The Mighty 690 (San Diego) in 1992. He later teamed with John Ireland for The Mason & Ireland Show in 1994. Mason is well known for his work on The Late, Late Radio Show with Tom Snyder & Steve Mason, as a broadcaster for seven Olympic Games and red carpet coverage from the Academy Awards.

John Ireland also serves as the Lakers radio play-by-play announcer alongside former Laker Mychal Thompson. A winner of six Emmy Awards for sports television, Ireland also works as a pre- and post-game reporter for the Time Warner Cable Sports Network. A UCLA graduate, Ireland’s career path took him to stations in Monroe, La.; Beaumont Texas.; and San Diego before finding a home at KCBS/KCAL-TV in 1995 as sports anchor and reporter. He is a four-time recipient of the Southern California Sports Broadcasters Irv Kaze Award for best sports radio talk show host.
Posted 2:48:00 AM