Streaming audio technology company Clip Interactive says it's not too late for radio broadcasters to get a piece of the subscription audio pie, reports Radioworld.

“The current combined U.S. subscription revenues of Apple Music, Pandora, SiriusXM and Spotify are worth $11.5 billion annually,” said Bill Freund of Clip Interactive this spring. Had U.S. radio developed its own on-demand subscription streaming audio service a decade or more ago, Freund added, they could have grabbed a big slice of that.

“Such a service could include commercial-free content, plus all of the personalities, local information, sports and all the other entertainment that broadcast radio provides,” he said. “They could have really leveraged this space and made money from it.”

The opportunity to make money from ad-free/on-demand subscription audio is not lost, as far as Clip Interactive is concerned. The Colorado-based company has developed a paid radio streaming app called Magic. What Freund calls a “technology demonstration app” was released to some broadcasters the final week of June.

The company believes at least 10 to 15% of radio listeners are willing to pay $12 each month to hear ad-free local radio. According to Freund, even that is a conservative estimate. 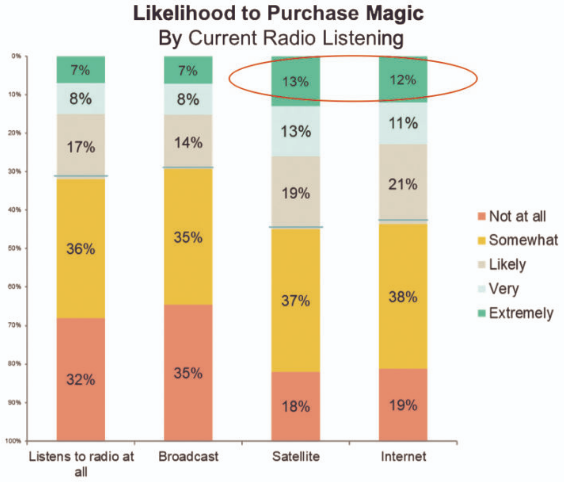 “Actually 32% of 2,000 listeners surveyed in a Harris Poll said they’d be willing to pay $12 a month for commercial-free on-demand broadcast radio streaming,” he said. This breaks down as 45% of SiriusXM, 43% of internet radio listeners and 29% of AM/FM listeners.

It would be expensive for individual broadcasters and even radio groups to develop their own subscription radio services. But using a Magic-style app, Clip says, listeners could replace on-air commercials with favorite songs/talk segments, request local traffic and weather on demand, and yet stay synchronized to a station’s on-air transmission, whether listening directly through their smartphones or smart speakers or in the car.