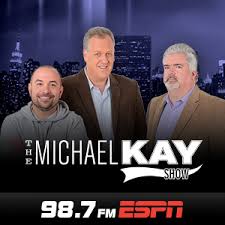 Michael Kay talks for a living, but after his surgery Tuesday he will have to be silent for three straight weeks, reports The NYPost.

He will be in triple-mute position — no speaking, no clearing his throat and he is not even supposed to burp.

After that, Kay hopes to be back to work as the TV voice of the Yankees and the host of his WEPN ESPN 98.7 New York afternoon talk show a month from now, he told The Post via text. Whether he will go back to full-time work right away is still to be determined.

Last week, Kay announced he will be out for a month because of his vocal cord issue. On Tuesday, he will have a nodule removed from his vocal cord by Dr. Steven Zeitels, the founder and director of the Massachusetts General Hospital’s Center for Laryngeal Surgery and Voice Rehabilitation.

The problem is just caused by years and years of use.

Among his other marquee clients, Zeitels has restored the voices of Joe Buck and Dick Vitale. Both reached out to Kay to encourage him. Kay has yet to hear from Adele.

Meanwhile, 81-year-old John Sterling is scheduled to return to the Yankees’ radio broadcast booth after the All-Star break. Last week, he took his first game off in three decades. Sterling has been “under the weather,” and the hope is the respite will allow him to feel better for the second half.

Ruocco had only done two baseball games professionally on radio before the four games, though he had called around 10 when he was in college at Fordham. He sounded very comfortable and informative in the booth.

Sterling will retire one day, notes Marchand. Ruocco, 32, is a lifelong Yankee fan, and would figure to be a candidate for what could be a dream job.
Posted 2:46:00 AM