The news media saw another decline in audience and revenue last year, though podcasts are still growing, the Pew Research Center reported Tuesday.

Despite growth in subscriptions at The New York Times and Washington Post, newspapers overall are having a hard time.

According to Courthouse News, Tuesday’s Pew report shows that weekday print circulation among the top 50 U.S. daily newspapers decreased in 2018 by 8% to just shy of 29 million subscribers, with Sunday subscribers seeing greater dip at a 9% decrease from 2017.

Weekly circulation has been on a downward spiral since 1989, when it hit more than 62 million subscribers nationwide, and Sunday circulation saw its decrease begin in 1993, after it hit roughly the same number of subscribers.

Revenue from circulation generally has increased steadily since the 1960s, when it hovered around $1.5 billion to $2 billion. In the 1980s and 1990s it saw a marked increase, rising to more than $30 billion and $47 billion, respectively. But it has not kept pace with inflation over that time.

“We do find that digital circulation has been going up but not enough to reverse the overall downward circulation trend,” said Michael Barthel, a senior researcher at Pew who worked on the report.

Reading attention seems to be lower, too. The average minutes spent per visit to the top 50 newspaper websites was roughly 2 1/3 minutes during the fourth quarter of 2018, down 5% from the same period in 2017.

Minority-oriented stations and publications are not faring much better. Circulation among both paid and free black-oriented newspapers varied but generally are on the decline. Viewership among the two largest Spanish-language television networks in the United States — Univision and Telemundo — also declined, though Univision saw a hit across all of its three national time slots.

Traditional radio continues to decline slightly, but online radio and podcasting numbers continue to creep upward, the report found. About two-thirds of Americans at least 12 years old listened to online radio in the past month, compared with 20 percent in 2007, according to data from Edison Research and Triton Digital.

Podcasts also have exploded in the past 10 years. In 2006, only 11% of that demographic had ever listened to a podcast, while last year more than half of Americans in that group had, according to the data.

The increase in podcast listening seems to be across most categories. More than 7 million public radio podcast users, for example, download NPR podcasts weekly, up from about 2 million in 2014.

According to data from Nielsen Media Research, 89 percent of Americans at least 12 years old listened to terrestrial radio in any given week.

Getting a job in journalism isn’t as attractive, either. 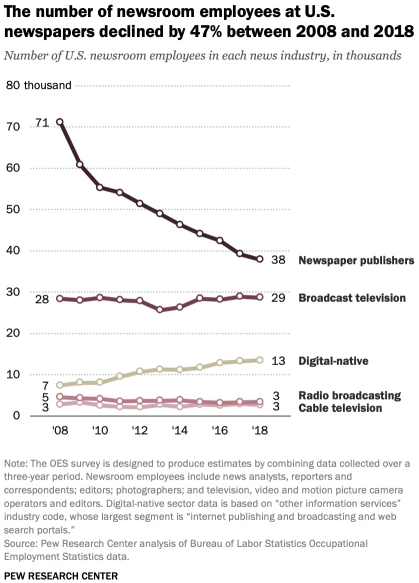 Some have attributed increased subscriptions at The New York Times and several other newspapers to a “Trump Bump,” due to the repeated criticism by President Trump and the aggressive coverage of those publications of his administration.  But the spike in subscriptions to those publications seems to have slowed significantly over the last year.
Posted 2:18:00 AM