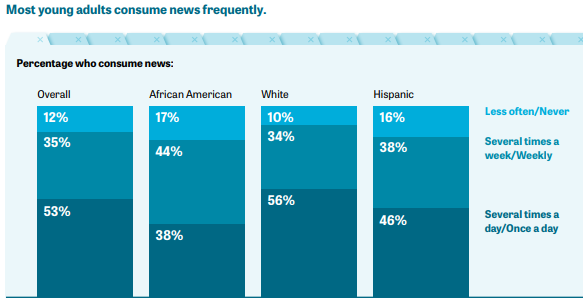 Dispelling the notion that young adults don’t pay attention to news, a new survey shows 88 percent of people ages 18-34 access news at least weekly, including 53 percent who do so every day. Hispanic and black young adults are more likely to share news with friends on social media.

Young adults of all races are highly digital news consumers, finding their news on social media, smartphone alerts or news websites. The most popular reasons young adults share news are because they find it interesting, helpful, or entertaining. However, highly partisan young adults are more likely than their peers to share news that confirms with others’ opinions.

Young adults often do not believe that their race or ethnicity is covered regularly in the media, even in their favorite news sources. In addition, a sizeable portion of young adults, especially many Hispanics and African Americans, say they see inaccuracies and irregularities in the coverage of their racial or ethnic communities.

The findings come from a recent Knight Foundation survey conducted by NORC at the University of Chicago. The nationally representative survey of 1,660 adults age 18–34 includes oversamples of African Americans and Hispanics in order to explore news behavior and beliefs of young adults within and across races and ethnicities. In addition, the study measures the impact of personal identities and psychological predispositions on young adults’ perceptions of news and news behaviors.

Many young adults have concerns about the ideological and political leanings of news sources, according to the survey. A majority believes certain news sources have ideological positions, divide society, and hurt democracy.