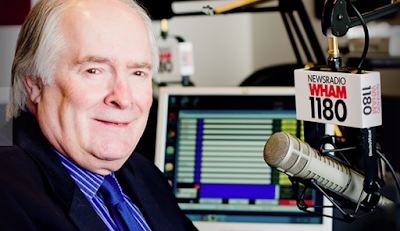 After slightly more than a month away from the microphone, Sports Talker Bob Matthews will be back on the air Tuesday night hosting on WHAM 1180-AM.

With the exception of one guest appearance that he made during his hiatus,  Matthews was last heard on the airwaves the evening of Friday, Feb. 1, reports the Democrat&Chronicle.

The next night, he slipped on ice outside the Five Star Bank building on the downtown corner of Court, Broad and Chestnut streets which is home to the iHeartRadio studios and broke his left ankle in three places.

He spent a few nights in a hospital , and then spent his recovery time in two separate facilities. He still can’t put much weight on the ankle and is struggling to get around, but he was tired of sitting around and said he wanted to get back to talking sports.

When Matthews was last on the air, Tom Brady and the Patriots had not yet won the Super Bowl (sigh); LeBron James and the Lakers were hoping to acquire Anthony Davis in a mega trade and make a playoff push; the Buffalo Sabres still had a pulse; and Bryce Harper and Manny Machado were unemployed.