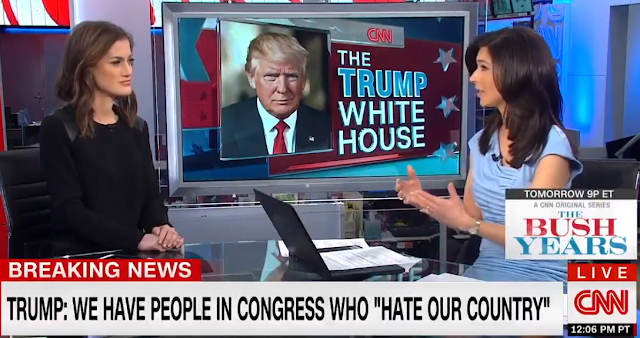 A CNN analyst and senior adviser at the University of Delaware's Biden Institute on Saturday charged that President Trump's call to "reclaim" America's heritage was similar to rhetoric used by Nazi leader Adolf Hitler -- but she appeared unaware that former Vice President Joe Biden himself had made a virtually identical comment in 2011.

Fox News reports Samantha Vinograd, who also served on the National Security Council in the Obama administration, claimed that Trump's remarks at the Conservative Political Action Conference (CPAC) on Saturday had made her "sick, on a personal level."

Trump told a raucous crowd at CPAC in National Harbor, Md., that he would recommit to prioritizing U.S. interests and praised "patriots" in attendance.

“The men and women here today are on the front lines of protecting America’s interests, defending America’s values, and reclaiming our nation’s priceless heritage," Trump said during a fiery two-hour, expletive-laden address. "With your help, we are reversing decades of blunders and betrayals. These are serious, serious betrayals to our nation and to everything we stand for. It’s been done by the failed ruling class that enriched foreign countries at our expense. It wasn’t America first; in many cases it was America last. Those days are over, long over.”

For Vinograd, those remarks evoked not patriotism, but the systematic gassing and slaughtering of millions of Jews, Slavs, homosexuals, and other minority groups.

"Preserving your heritage, reclaiming our heritage -- that sounds a lot like a certain leader that killed members of my family and about 6 million other Jews in the 1940s," Vinograd told CNN anchor Ana Cabrera, who had prompted Vinograd by ominously arguing that Trump's language “taps into historically darker times."


But several conservative commentators quickly pointed out that Trump, in fact, sounded less like Hitler and more like Biden at the 2011 Florida Democratic Party state convention, when he was stumping for Obama's re-election.

“It’s time to stand up," Biden yelled to the crowd. "It’s time to fight back. It’s time to reclaim our heritage, and it’s time and we are ready. ... We are looking for this fight! The future of our country depends on it." Biden added: "It's long past time we get back up, that we stand up, that we reclaim what every American thought was their birthright: the American Dream."

Although Vinograd posted a video of her own comments to Twitter over the weekend, backlash was relentless not only to her Hitler remark, but also to CNN's decision to hire Vinograd as a national security analyst -- a seemingly nonpartisan title -- without clearly reminding viewers that she works at the Biden Institute.
Posted 1:15:00 AM