NBCUniversal says its fledgling “prime pod” premium ad format is delivering the engagement lifts it had promised, and the company is preparing to expand it to other dayparts and potentially add more of them to its prime-time originals, reports AdWeek.

After declaring at the start of the season that brands would get the retention boost they paid a hefty premium for during the upfront, NBCUniversal worked with researchers during the fourth quarter to determine whether the prime pods were indeed driving increased viewer engagement and greater impact for brands. Laura Molen and Mark Marshall, presidents for NBCUniversal advertising sales and partnerships, shared their findings with Adweek and talked about their upcoming plans for the format.

Just over a year ago, NBCUniversal unveiled its initiative to reduce ads by 10 percent, beginning last fall, on the 50-plus NBCU prime-time original series across its entire broadcast and cable portfolio. Those plans included its lucrative new prime pod format: a 60-second pod of audience-targeted advertising, usually in the first break of those same prime-time original series.

The company doubled down on its ad reduction efforts in January, announcing plans to cut prime-time ad loads another 10 percent by 2020, as well as an expansion of prime pods in prime time as well as another dayparts, like the Today show and late night. 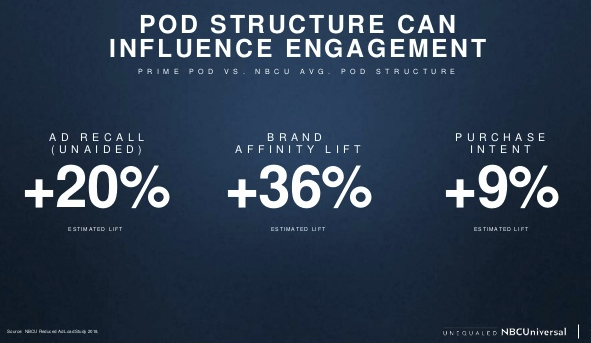 “Viewers are telling us that prime pods are the kind of commercial experiences that all commercial experiences should aspire to be, in being that they are more cohesive with the content, they are shorter formats, and so it really drove the key metrics,” said Molen, who noted that purchase intent was up nearly 30 percent in the key adults 18-34 demo. “They were very vocal in telling us, in all forms of research, that this is the way to do ads.”

In its search engagement study with EDO, NBCUniversal found that prime pods had a 12 percent lift in search engagement and was “over two times more impactful in terms of search results than traditional pods,” said Molen.
Posted 2:22:00 AM