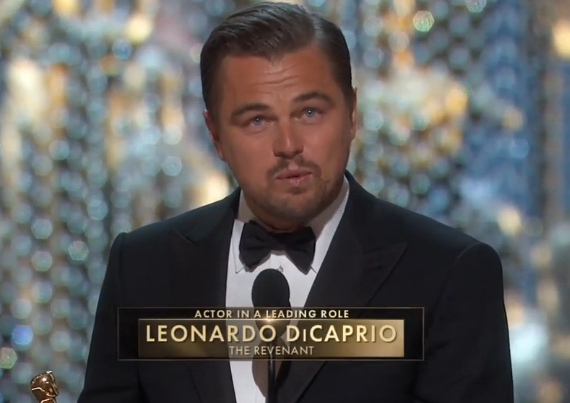 In a ceremony where no single movie commanded attention, Mexico's Alejandro Inarritu nabbed the best directing Oscar for "The Revenant", becoming the first filmmaker in more than 60 years to win back-to-back Academy Awards. Inarritu won in 2015 for "Birdman."

"The Revenant" went into Sunday's ceremony with a leading 12 nominations, and was among four movies believed to have the best chances for best picture after it won Golden Globe and BAFTA trophies.


1pm Update: TV Ratings...Sunday night’s telecast on averaged a 23.6 metered-market household rating, according to Nielsen, down 6 percent from last year, when the Oscars averaged a 25.0 overnight. Final ratings generally fluctuate a bit – last year’s telecast adjusted to a 24.6. But right now, this Oscars is posting the lowest overnight rating in seven years. Last year’s show was the least-watched in six years. Among adults 18-49, Sunday’s show averaged a 13.5 adults 18-49 overnight rating, down 5 percent from 2015.

The ambitious 20th Century Fox Pioneer-era tale, shot in sub-zero temperatures, also brought a first Oscar win for its star Leonardo DiCaprio, who got a standing ovation from the A-list Hollywood audience.

"I do not take tonight for granted," DiCaprio said, taking the opportunity in his acceptance speech to urge action on climate change.

"This film gave a voice to survivors, and this Oscar amplifies that voice, which we hope can become a choir that will resonate all the way to the Vatican," said producer Michael Sugar.

Rising star Brie Larson, 26, took home the statuette for best actress for her role as an abducted young woman in indie movie "Room," adding to her armful of trophies from other award shows.

"Sly, no matter what they say, remember, to me you are the best, you were the winner. I'm proud of you," Arnold Schwarzenegger, a fellow action star, said in a short video he posted online.

Warner Bros "Mad Max: Fury Road" was the biggest winner, clinching six Oscars, but all were in technical categories such as costume, make-up and editing.
Posted 4:28:00 AM