The Pittsburgh Pirates and CBS RADIO’s Sportsradio KDKA 93.7 FM The Fan announced today the parties have agreed to a multi-year broadcast contract extension. The Fan will continue to be the Pirates flagship station and broadcast a total of 16 Spring Training games, all 162 Pirates regular season games, and all post-season action each year of the agreement.

“The Pirates and KDKA Radio have a long and incredibly rich history together. Our fans were excited when the Pirates returned to the KDKA family in 2012 and we are thrilled to continue the very strong relationship,” said Frank Coonelly, Pirates President.

“Along with the Pirates Radio Network affiliates, KDKA-FM brings our games to Pirates fans across our entire territory. In addition, Sportsradio 93-7 The Fan supplements the game broadcasts with Pirates programming throughout the season, including its pre- and post-game shows and other Pirates specials. We look forward to continuing to work closely with the CBS Radio family to bring the highest quality Pirates programing to our fans.”

The Fan and the 40 station Pirates Radio Network will once again feature announcers Steve Blass, Greg Brown, Bob Walk and John Wehner calling the action for radio and television throughout the 2016 season, along with the newest broadcast addition, play-by-play man Joe Block. Brown and Block will handle the play-by-play duties while Blass, Walk and Wehner serve as color analysts. 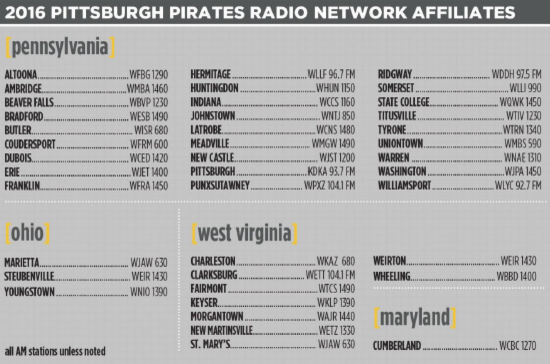