The name of Dick Clark, the late host of "'s Bandstand" and Dick Clark's "New Year's Rockin' Eve" is becoming part of the complex.

The school announced today that it will name its renovated studio facilities Dick Clark Studios in honor of legendary entertainer and alumnus who graduated in 1951, according to Dave Tobin at syracuse.com.  The Kari and Dick Clark Foundation donated $5 million to the school, a gift announced by Clark's widow, Kari Clark, at the school's annual Mirror Awards ceremony in , which honors excellence in media industry reporting. 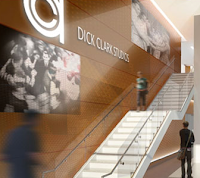 The $18 million state-of-the-art studio is scheduled to be completed in the fall of 2014.

Clark began his broadcasting career with radio station gigs in Central New York, working at WAER-FM as an SU student and at 's WRUN radio, where his father, SU alumnus Richard A. Clark, '18, was the station manager. During Clark's senior year at SU, he joined WOLF-AM in .

After returning to WRUN and then moving to a television station, Clark's star took off when he headed to to join WFIL-AM. The young DJ soon became host of "American Bandstand," a WFIL-TV program that was eventually broadcast nationwide on ABC. Through the show, Clark helped introduce rock 'n' roll to mainstream .