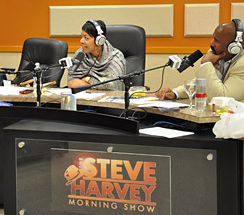 He's already a star, but Steve Harvey will soon be part of history.

The jack-of-many-trades will be honored with a star on the Hollywood Walk of Fame on May 13, the city's Chamber of Commerce announces. According to bet.com, will be feted by fellow comedian Ellen DeGeneres and self-help guru Dr. Phil McGraw at the ceremony. The king of comedy joins the ranks of a century of entertainment legends and will be the 2,497th person to receive the honor.

While 's star will go in the radio section of the landmark boulevard, he is also a comedian, television talk show host, actor and best-selling author. Last year, his relationship guide Act Like a Lady, Think Like a Man was adapted into a hit film, with a sequel already in the works. In September, he launched an eponymous daytime talk show.