Jerry J Chapman is headed back into the radio business with a deal to buy six radio stations in and three nearby cities.

According to starpress.com, Chapman and three partners have agreed to buy the six stations from Barry Drake's Backyard Broadcasting of Jacksonville, Fla.

The stations include WLBC in , which broadcasts basketball and football games.

Other stations are WERK and WXFN, also in ; WHBU in ; WMXQ in ; and WMQX in . Four are FM stations and two are on the AM dial.

Chapman said he will leave his job with Maverick to become the operating partner for the newly formed Woof Boom Radio. The new company will operate the six stations starting June 1 and establish its offices in , Chapman said.

“There are no designs on changing anything. Our biggest mission is making sure we are doing great local broadcasting,” he said. “Over time we will be looking at a lot of things.” 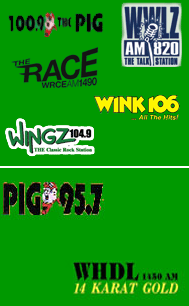 Meanwhile in , Backyard Broadcasting has agreed to sell its cluster of stations to Bruce Mittman’s Community Broadcasters LLC, backed by Northwood Ventures LLC.

Mittman and his partners are also considering making a big for The Boston Globe which the NYTimes Co. is trying to sell.

The Globe and its sister paper in , the Telegram & Gazette, could fetch as much as $100 million or more.

Commenting on the buys, Mittman says “What we like about the upstate () is that these are self-contained markets,” Mittman says. “They don’t have nearly as many media options so radio becomes an even more important player in those communities.”

When the deals close Backyard will be left with six stations in Williamsport, PA.  So one must wonder, if they too are on-the-block.
Posted 4:58:00 AM