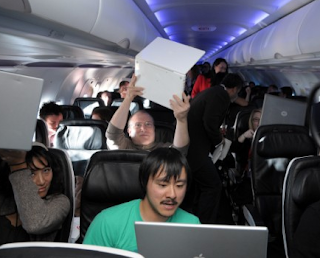 According to USAToday, the Federal Communications Commission on Thursday approved new rules that would increase the available spectrum for air-to-ground broadband service. Commissioners expect passage of the rules would drive competition, improve Wi-Fi quality, while also leading to lower prices.

"People expect 24-7 Internet access wherever they are, at home, on the road, in businesses and on planes," says FCC Chairman Julius Genachowski. "What we did today ... should significantly improve the quality and the speeds of Internet access on planes in the air."

Current air-to-ground broadband connectivity is covered withing a four-Megahertz allocation, but the FCC proposal would establish increase that allocation to 500 megahertz. "For passengers, that should mean higher speeds and the ability to access a wider range of applications, like video," said commissioner Ajit Pai.

Back in 2011, Qualcomm submitted a proposal to the FCC for a Next-Generation Air-Ground system that would use 150 or more base stations to generate an in-flight Internet system that would provide 300 Gigabits per second, fast enough to all passengers to stream Netflix and other Internet video.