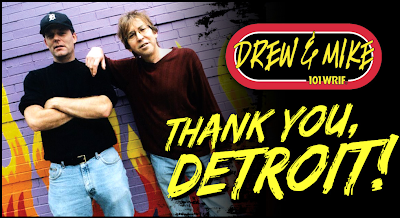 The news broke Wednesday that "Drew and Mike' on Greater Media's  WRIF 101 FM will be off the air as of May 17 and the move will lead to a historic goodbye from its hosts. (See original posting, Click Here)

But, according to mlive.com,  both and Mike Clark sounded Thursday morning like they weren't necessarily ready to end their careers, less than 24 hours after several media outlets reported the show will be replaced by "Dave and Chuck the Freak."

Here's how the opening minutes of Thursday's "Drew and Mike" show went:

Mike: "Nothing that I know of; just a routine day."

Drew: "There's a little mini-headline in the Free Press this morning ..."

Drew: "'WRIF drops 'Drew and MIke' We've been dropped. Dropped. Man, I can just hear an anvil into the ground.

Drew: "So yeah, first insult of the day. Lots more to come."