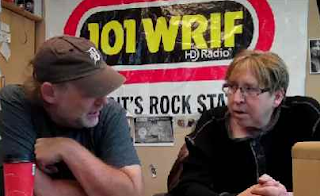 The Detroit News is reporting their last broadcast for Drew Lane, Mike Clark and newscaster Trudi Daniels will air 6-11 a.m. May 17 on WRIF, when they will take calls from listeners and past show contributors.

Clark was still stunned over the news, late Wednesday afternoon.

"To be honest, I sure didn't see this coming," Clark said. "With the great success we've had, and the numbers we put up for so long, I never suspected it would end this way. If it would be an end, I thought it'd be our decision to retire."

Lane, Clark and Daniels were told Wednesday by Greater Media management that a decision had been made not to renew their contracts, and that the station was going to go "in a different direction," Clark says.

On Wednesday morning and throughout the day, the Drew & Mike staff were swamped with text messages, emails and phone calls.

Early in the afternoon, Greater Media released a statement confirming the show's departure.

"We would like to thank Drew, Mike, Trudi and the entire team for their many contributions to the station over the years in the Motor City," said Greater Media Detroit market manager Steve Chessare. "They are true professionals, and we are very grateful to them."

Rumors circulated that the Dave and Chuck "the Freak" program, which aired on Windsor's 89X (CIMX-FM) until November, would replace Drew & Mike as WRIF's new morning show.

In November, a representative for Bell Media Radio in Windsor-Detroit admitted that the show's stars had accepted an undisclosed offer to work elsewhere, most likely in the Metro Detroit market.

But Greater Media spokesperson Heidi Raphael would not confirm or deny that Dave and Chuck "the Freak" had been hired, saying in an email, "We have not made an announcement about any new morning show." The station's plans would be announced shortly, Raphael said.