Radio The Last Choice For News 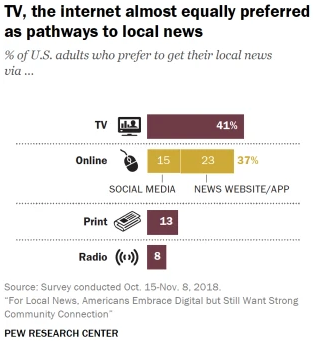 The ongoing shrinking of the old media industry and business model has resulted in the elimination of 33,000 newspaper jobs, and now, even big, new-age, digital outlets are facing pressure, according to The Washington Examiner citing a new analysis.

The Pew Fact Tank report is the latest portrayal of the difficulties faced in the news business and the reality that the explosion in online media has fallen far short of making up for the job losses in newspapers and magazines.

Promising, yes, but it added that larger outlets have been suffering through recent job cuts.

“Among the largest digital-native outlets — those with a monthly average of at least 10 million unique visitors — 14% went through layoffs in 2018 and 20% did the year before. Nearly all the digital-native news outlets that laid off staff in 2017 or 2018 cut more than 10 employees,” it said.

The report also showed a continued decline in the number of Americans who say they get their news from newspapers and television.

Social media beat out papers in the category, where people could pick more than one platform, dominated by TV at 49%.
Posted 1:40:00 AM