On the second day of a huge defamation trial against ABC, a marketing expert took the witness stand to break down how the network in March 2012 created a "frame" that fostered negative perceptions of Beef Products Inc.

BPI is suing ABC for billions of dollars over a series of reports about its product, officially called "lean finely textured beef" (LFTB) and dubbed “pink slime” by critics. After five years, the case has made it to trial over ABC's First Amendment objections. 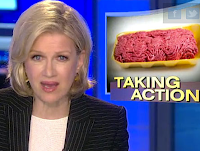 On Monday, the trial commenced with opening statements from BPI, arguing that it lost most of its business thanks to ABC's "pink slime" journalism, and the network, contending there were no false statements and that the plaintiff has been hiding a scary truth about its product.

According to The Hollywood Reporter, after hearing all about "pink slime" on the opening day, jurors finally got a chance to see the many ABC World News segments that had viewers sending in alarming inquiries and had supermarket chains pulling the LFTB product from shelves. And when the videos were shown, Dr. Kivetz came along with a tally: 131 communications from ABC he counted from March 7, 2012, to April 3, 2012, which included broadcasts, tweets, web republications and Facebook posts; 361 times that the words "pink slime" were uttered or written.

"When you refer to the product repeatedly as 'pink slime,' you are creating a negative frame," said Dr. Kivetz, echoing BPI's belief that ABC should have used the official, government-approved LFTB name.

On cross-examination from ABC's attorney Dane Butswinkas, the witness had to acknowledge that what's negative isn't necessarily what's false.