PwC has released its 18th annual Global Entertainment and Media Outlook 2017-2021, an in-depth, five-year outlook for global consumer spending and advertising revenues directly related to entertainment and media (E&M) content. Rapid changes have created a gap between how consumers want to experience and pay for E&M and how companies produce and disseminate their offerings. E&M companies were accustomed to competing and creating differentiation primarily based on two dimensions: content and distribution. Now, they must focus more intensely on a third: user experience (UX).

Global E&M revenues are expected to rise from $1.8 trillion in 2016 to $2.2 trillion in 2021 at a compound annual growth rate (CAGR) of 4.2 percent – down from the 4.4 percent CAGR the firm forecast last year. By comparison, PwC's 2017 Outlook expects U.S. E&M revenues to reach $759 billion by 2021, up from $635 billion in 2016, increasing at a CAGR of 3.6 percent – holding steady at the same CAGR as last year. While there are increases in revenue, E&M is approaching an industry plateau. Traditional, mature segments are in decline; the internet and digital E&M content is growing though at a slowing rate; and the next wave of content and entertainment is in areas, such as e-sports and virtual reality, which are just beginning to accelerate. 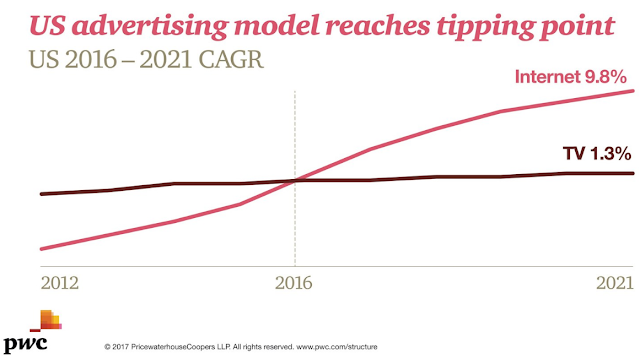