UPDATE 3pm Friday: After Rush Limbaugh finished up his show at 3 p.m.  News/Talk WGST-AM was no more.   Instead, 640 began airing ESPN Deportes. (Clear Channel also operates a Hispanic music station on the FM side at 105.3 called El Patron.) 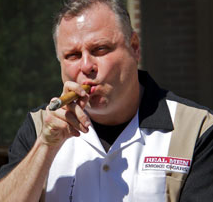 "I was told there was a full format flip, and they were not going to continue in the news talk biz," Humphries told 11Alivereporter Jennifer Leslie. "But I don't know anything more than that. Honestly, they didn't tell me anything."

After the morning drive on Wednesday, local news and talk disappeared on WGST. Humphries last show was Tuesday.

He expects the station will move to a Spanish sports talk format after losing a ratings king Rush Limbaugh to 750 WSB-AM.  WGST has been news talk since the 1980s.

"For me personally, I was planning to leave anyway. My contract was up in another month. I decided I wasn't going to stay."

Family matters were already pulling Humphries away from Atlanta, but he's not going off the air. He does a separate syndicated show that reaches four million listeners on 280 radio stations across the country every night.

Today is the last day for Rush on 640. He to WSB’s simulcast news/talk format  on Monday.