Study: Dayparting A Valuable Tool For Most Media

A new study conducted by The Media Audit begins to reveal that dayparting, a practice common among TV and radio broadcasters, can be an effective way for advertisers wanting to reach different demographic segments throughout the day.

For example, findings from The Media Audit's 2011 National Report reveal that as the consumer marketplace is constantly expanding and fragmenting, so too are habits of TV viewers and radio listeners. Analysis conducted among more than 104,000 respondents across 81 U.S. cities reveals that the percent of adults 18+ who are viewing primetime television in a typical day is 62.1%, a figure that is down from 64.2% three years ago.  Primetime is the most coveted of dayparts by advertisers, and represents the 7 or 8pm to 10 or 11pm time period, depending on the network and time zone. The shift in TV viewing has often been associated with consumer multi-tasking and the explosive growth in the Internet and social media. 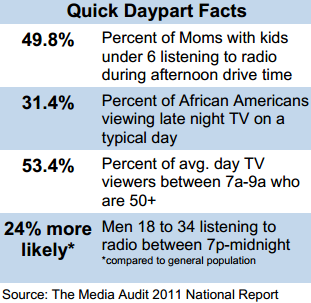 FYI reported earlier this year that among radio listeners, the percent who are listening between midnight and 5am had jumped 10% between 2009 and 2010, with nearly half of listeners who are between the ages of 18 and 44. While some may discard the value of overnight radio spots, advertisers targeting to a narrow consumer segment such as young males may find a higher value.

For instance, a radio advertiser targeting upscale consumers who earn greater than $150,000 in household income would potentially find a higher ROI in buying afternoon drive time slots. That's because according to The Media Audit, 54.4% of individuals with a household income of $150,000 or more are tuning into radio between 3pm and 7pm on a typical day. The figure compares to 41.4% for all adults. As a result, those earning $150,000 or more in household income are 31% more likely than the general population to listen to radio during this time frame.