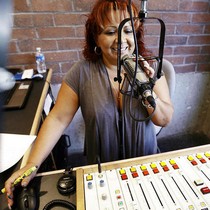 In a saucy pencil skirt, permed hair ratted up high, Geovanna Martinez does a little jig down the length of the soundproof recording studio Salt Lake City's newest Spanish-language radio station calls home and grabs the microphone. Elizabeth Stuart at Deseret News writes, Martinez pumps her hips from side to side as the traditional Mexican music fades out and, with animated expression, exclaims, "La Favorita 104.7 FM: La que se escucha ahorita!"
"I dance because my mood is happy," said Martinez, 46, a Spanish language radio DJ of 15 years, pursing painted pink lips and tapping blue-glitter nails against the counter. "I love what I do."

La Favorita started out on a low-strength AM frequency in 2006, a small-time dream of a local Hispanic businessman with little reach beyond its Bountiful base. The radio station stepped onto the scene at just the right time, though: Utah's Hispanic population grew by 78 percent over the last decade, according to the U.S. Census, and La Favorita's listenership swelled right along with it. July 7 the company moved to Salt Lake City, switched to an FM frequency and started broadcasting from Payson to Brigham City.

The little station's experience is indicative of a nation-wide trend. English language media is having a rough go of it. Newsrooms across platforms saw audiences either stall or decline in 2010, according to the Pew Research Center's Project for Excellence in Journalism. Newspaper newsrooms, now 30 percent smaller than in 2000, have shed some 1,500 jobs. But while Spanish-language media has taken some similar hits among daily newspapers, radio stations have grown by more than a third since 2002 and revenues are rising among weekly papers, according to market research analysts. In television, Spanish-language networks are seeing double digit ratings boosts year-over-year. Top network researchers have predicted the media giant Univision station — now fifth in terms of ratings — could soon surpass traditional networks.