The combined audience of the Top 20 webcasters in Triton Digital’s Webcast Metrics for June 2011 is up 27% from last year, according to results released Tuesday and reported by Kurt Hanson's RAIN. 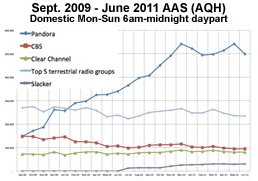 Pandora and AccuRadio led the way in year-over-year growth at 47% and 30% increases, respectively, in AAS (Average Active Sessions, which is essentially equivalent to AQH — i.e., average simultaneous listeners).

Presumably Slacker, too, would show impressive growth over June 2010, though they were not tracked in Webcast Metrics until July 2010. Slacker has grown 131% since July 2010 (though some of that was due to Triton Digital gradually incorporating the webcaster’s mobile audience).

Several broadcasters grew their online audiences year-over-year, too, with Emmis up 24%, Citadel up 19%, and Radio One / Interactive One up 8%.

Most month-over-month growth came from the pureplays. In the Domestic Mon-Sun 6a-12m daypart for June 2011, Slacker showed 7% growth over May 2011, AccuRadio 4% and broadcaster Greater Media 3%. Meanwhile, 977Music.com recovered after falling sharply in April and May.