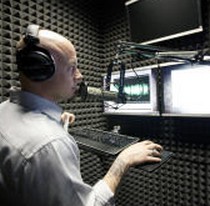 Everything about NewsFix screams an attitude of revolution: from the use of the Beatles song as its opening theme to red-and-black NewsFix manifestos on the newsroom wall to chalkboard walls where Channel 39 staffers are encouraged to scrawl comments, suggestions and Russian graffiti (the last courtesy of Sergey, the graphics guy).

According to a story by David Barron at the Houston Chronicle, the attitude is born of adrenaline, optimism and several weeks of rehearsal prior to the anchorless newscast's March 19 debut, not to mention the bunker mentality of people who know that dozens of their camera-hogging colleagues at other stations are likely rooting for them to fail miserably.

"We're trying to create a different voice," said Steve Simon, one of the few holdovers from the old KIAH news regime. "If you take a story that the other stations are doing, you can piecemeal a reporter from Channel A to Channel B and you couldn't tell the difference. We're trying to tell the story differently."

Less than two weeks into its twice-daily existence, NewsFix remains mostly attitude and most definitely a work in progress. Stories often are second-day or evergreen quality, easily outnumbering what Gary Jaffe, the station's "imaginer" (aka news director), refers to as "day-of news."

"The day we launched, we had missile attacks in Libya and (day-care operator) Jessica Tata turning herself in, so we still have a component of day-of news," Jaffe said. "But we're not always updating the same stories, trying to push the timeline forward. We're trying to bring new stories into the mix."