WGN-Ch. 9 Chief Meteorologist Tom Skilling is set to return to work Monday after undergoing gastric-bypass surgery, which he called “a life-altering experience.”

The Chicago Tribune reports the 68-year-old Skilling, 68 has lost 50 pounds since the March 4 procedure. Doctors also found and repaired a small hernia, he said. 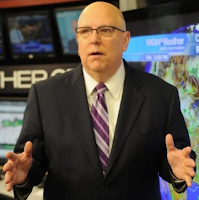 He said he’s still in some pain, but he’s excited to get back to work. He will be wearing new suits, and he will be working remotely. He has transformed his North Side home into a TV studio to deliver his weather forecasts during the coronavirus crisis. Meteorologists, anchors and reporters from other Chicago TV stations also have been broadcasting from home.

“This is amazing. I’ve been doing this for 50 years. There wouldn’t have been even a prayer of a chance of setting up what we set up here to do,” Skilling said. “I’m able to prepare every graphic that I prepare at the station right here.”

Skilling said he couldn’t walk three blocks or climb a flight of stairs without getting winded before the surgery.  Now, Skilling said he is gradually adding solid food to his diet, which is a learning process because his stomach can be temperamental.

“The major task the last couple of weeks has been getting used to a new diet. Meals for me now consist of little two-to-three ounce servings of protein. Because of the limited volume in your stomach, you don’t get the nutrition you once did with your former football-sized stomach,” Skilling said.
Posted 1:12:00 AM