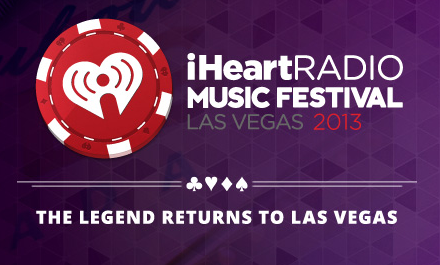 Clear Channel today announced the artist line-up for the biggest live concert event in radio history, the iHeartRadio Music Festival, taking place in on September 20 and 21.


Ryan Seacrest, host and producer of the top-rated nationally syndicated LA Morning drive-time show - “On Air with Ryan Seacrest” on Clear Channel’s 102.7 KIIS-FM, will return for a third record-breaking year to host the Festival, kicking off the two-day event on the evening of Friday, September 20 at the MGM Grand Arena in Las Vegas.

The Festival will broadcast LIVE across Clear Channel radio stations in 150 markets nationwide, and this year will air as a two night special on The CW Network on Sept. 30 (night one) at 8-10 p.m. ET/PT and Oct. 1 (night two) at 8-10 p.m. ET/PT, to launch the network’s fall season.

This year, the Festival gets even bigger with the addition of the “iHeartRadio ” on Saturday afternoon. The will feature live performances on two stages by nearly a dozen popular and up-and-coming artists, including Miley Cyrus, The Wanted, Jason Derulo, The Band Perry, Avril Lavigne, Krewella, Cher Lloyd, twenty one pilots, Pete Tong, AWOLNATION and a special guest appearance by Ne-Yo.

“The iHeartRadio Music Festival truly captures the essence of what music is all about — excitement, energy and the deep connection between artists and fans,” said John Hogan, Chairman and CEO of Clear Channel Media and Entertainment.

“Every year, we try to push the boundaries of what live music events can be by showcasing the hottest artists across all genres and radio formats all on one stage. And year after year, the iHeartRadio Music Festival produces more and more of music's most memorable moments. Now, with the addition of the iHeartRadio Music Festival Village featuring even more artists, this year will push those limits even further — it's going to be incredible.”

Promotion of 2013 iHeartRadio Music Festival kicked off this morning with a simultaneous roadblock announcement by all 850 Clear Channel radio stations nationwide, their websites and iHeartRadio. In addition, throughout a summer-long on-air and online promotion, Clear Channel station listeners across the country will have the chance to win one-of-a-kind, all-expense paid dream trips to Las Vegas where they will join thousands of other dedicated music fans to experience the 2013 iHeartRadio Music Festival at the legendary MGM Grand.
Posted 11:18:00 AM