WAPE  690 AM, Jacksonville, Florida, was a Top 40 radio station with a powerful signal, covering a large area along the East Coast of the United States, during daylight hours.  Its 690 kHz 50-kW daytime/25-kW nighttime frequency is now occupied by WOKV, owned by Cox Radio.

The station, known as The Big Ape, debuted March 1, 1958 with 25,000 watts, operating sunrise to sunset only. WAPE’s almost unequaled daytime coverage area was a result of several factors... the frequency (AM stations on lower frequencies cover far more territory than those on higher frequencies during the day), the location of the tower near the coast (AM signals travel much greater distances over salt water than over land), and the power (25,000 watts packs a lot of punch). 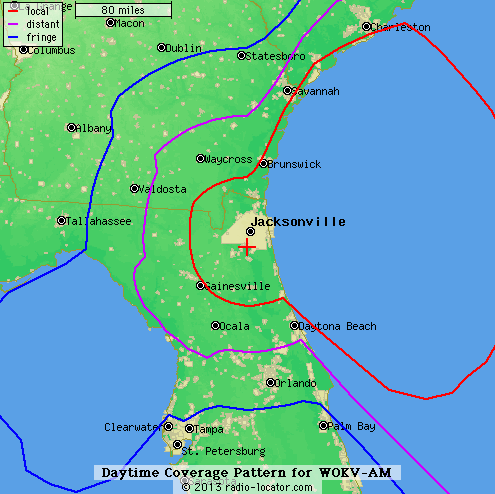 The result was a station with strong coverage from , , to , , and a very audible signal from , , to .

In the mid '60s, WAPE further solidified its position by increasing daytime power to 50,000 watts and began broadcasting 24 hours a day.


From 1959 through the early 1970’s, it could be said with great certainty that every teenager living along the southeast coast, from Daytona Beach to Wilmington, North Carolina, had two favorite radio stations; the Top 40 station in their home town and Jacksonville’s WAPE.  And in some cases, it was the distant WAPE, and not their hometown station, that was on top of the local ratings.

The exceptional coverage area of the WAPE signal would allow it to spread its musical influence up and down the coastal areas of the southeast.