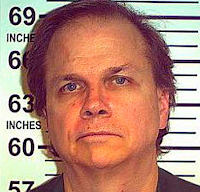 John Lennon’s killer hoped to live with an upstate New York minister and fell trees for work if released from prison, a parole board heard, according to a story in the New York Daily News.

Mark Chapman, 57, made a seventh failed bid to become a free man earlier this month where he spoke about his love for God, his regrets over the ex-Beatle’s murder and his hopes for the future.

Chapman, who fatally shot Lennon multiple times as he walked into his Dakota apartment building with wife Yoko Ono, can still describe the incident in chilling detail.

In a transcript of the Aug. 22 parole board hearing, the murderer remembers Lennon as a “very cordial and very decent man” who stopped to sign his album cover earlier the same day.

“He was very kind to me,” Chapman said. “Ironically, very kind and was very patient with me. The limousine was waiting, his wife was waiting in the limousine, and he took his time with me and he got the pen going and he signed my album. He asked me if I needed anything else. I said, no. No, sir and he walked way.”

Chapman, 25 at the time, laid in wait outside the upper West Side building for 11 hours until the musician returned, and calmly shot him from behind.