Harold Lane "Hal" David (May 25, 1921–September 1, 2012) was an American lyricist. He grew up in Brooklyn, New York. He was best known for his collaborations with composer Burt Bacharach. He was 91.

David is in the Songwriter's Hall of Fame and according to his bio, David, as a young man, turned to journalism as a potential career, and like a number of other illustrious magicians of words on the printed page, cut his eye teeth at The New York Post.

While pouring out words of the news in The Post's city room, David dabbled in song lyrics as well, and thanks to a lucky break, wrote his first successful lyric for "swing and sway" bandleader, Sammy Kaye, in 1947. With this entree, the door was opened and other hits came tumbling out of David's busy typewriter. One of the first of these was "Four Winds and the Seven Seas," created with co-writer, Don Rodney, a vocalist for the Guy Lombardo orchestra. A recording by the Lombardo ensemble became a hit. David followed with "Broken-Hearted Melody," which became Sarah Vaughan's biggest single hit ever, and "Johnny Get Angry," a great success for yet another female singer, Joanie Sommers. 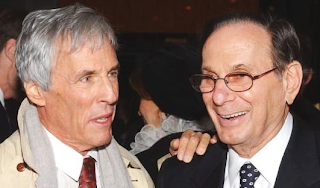 One of the best-known, most productive songwriting teams of the late '50s and the decade of the ’60s was born in the offices of The Famous Music Corporation in 1957, when Hal David first met Burt Bacharach. Famous exec, Eddie Wolpin, offered them a room and a piano and there was almost instant rapport. Rapport in turn grew into productivity and the two were hitting paydirt in short order with such titles as "Story of My Life," a hit for country singer, Many Robbins, and the same year, "Magic Moments," an important hit for Perry Como. Other hit songs followed, each generating a share of heavy chart activity. Among them were "Wishin' and Hopin'," "Twenty-four Hours from Tulsa," and a pair recorded by the diminutive Connecticut hitmaker, Gene Pitney, "Only Love Can Break a Heart" and "The Man Who Shot Liberty Valance."

One singer in particular, Dionne Warwick, has for years been associated with Hal David and collaborator, Burt Bacharach. Their initial success with Warwick came when she recorded a demo of their song, "Make It Easy on Yourself," heard by and recorded into a hit by Jerry Butler. Later presented by Scepter Records with a chance to not only write songs for Ms. Warwick but to produce her records as well, long runs of success ensued, each of them bearing the estimable trademark lyrics of Hal David. The hit's included "Don't Make Me Over," "Message to Michael," and "Windows of the World." Warwick at the time, commented on another of the team's songs, "What The World Needs Now," which she felt "should be the national anthem." The song actually became identified for years with singer/songwriter, Jackie DeShannon.

Later, David, with Bacharach and others, produced a collection of top hits for other artists, including the Oscar-winning "Raindrops Keep Fallin' on My Head," "Alfie," "What's New Pussycat," "The Look of Love," (Oscar nominees), "Wives and Lovers," "Casino Royale," "I'll Never Fall in Love Again," "It Was Almost Like a Song," (all Grammy nominees), "This Guy's in Love with You," "Anyone Who Had a Heart," "Promises, Promises," "Do You Know the Way to San Jose," "A House Is Not a Home," "Walk on By" and "Trains and Boats and Planes."

During the late 70s, David ventured into Nashville territory, where he co-wrote with Archie Jordan, "It Was Almost Like a Song," which became a smash country hit for Ronnie Milsap, later crossing over into the pop charts. Another country artist, the renowned Willie Nelson, duetted with the Latin star, Julio Iglesias in the hugely successful "To All The Girls I've Loved," which David co-wrote with Albert Hammond.