Chicago radio legends Larry Lujack and Tommy Edwards will make a rare personal appearance together in Springfield, Ill. next week.   The former WLS (890 AM) on-air partners are reviving their roles as  “Uncle Lar and Lil’ Tommy” in seven radio spots for the Illinois Emergency  Management Agency’s (IEMA) statewide preparedness campaign.

“These radio spots are really fun and will help us catch the listener’s ear with our message about pet preparedness,” said IEMA Director Jonathon Monken.  “Pets are an integral part of many families and shouldn’t be forgotten when developing a complete family preparedness plan.” 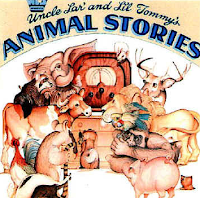 The new spots will begin airing soon on radio airwaves throughout Illinois as part of IEMA’s broadcast preparedness campaign, which is aired in cooperation with the Illinois Broadcasters Association (IBA) Public Education Partnership (PEP) program.  The spots will air on more than 200 Illinois radio stations.

Lujack, a Chicago radio personality icon for more than four decades spanning back to the 1960s, has since been inducted into the Radio Hall of Fame, the National Association of Broadcasters  Hall of Fame and the Illinois Broadcasters Association’s Hall of Fame.  He is now retired and lives in New Mexico.  Edwards can still be heard frequently on the Chicago airwaves and serves as courtside announcer for the Chicago Bulls.

Edwards and Lujack will headline the annual conference of the Illinois Emergency Management Agency, Sept. 5th in Springfield, Ill.

This past Tuesday marked the 25th anniversary of Lujack’s retirement from WLS-AM (890). The now classic Animal Stories bit began in the early ’70s as an outgrowth of Lujack’s morning farm reports on WLS.
Posted 12:03:00 AM