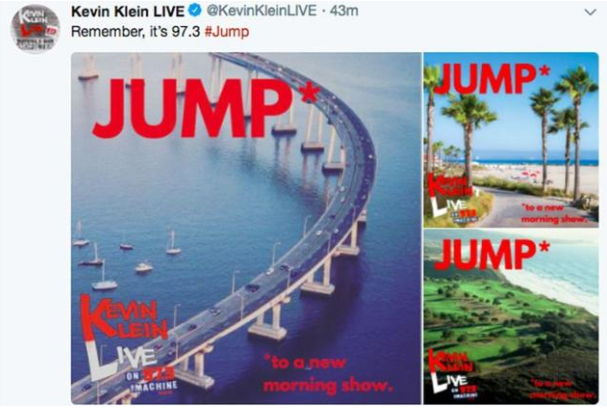 A new radio morning host joining the Padres’ flagship radio station this week generated outrage on social media Monday evening with a promotional tweet viewed by many as insensitive to suicide, reports the San Diego Union-Tribune.

Kevin Klein, set to begin a new show Thursday on KEGY 97.3 FM, sent out a tweet with a photo of the Coronado bridge and the text “JUMP* … *to a new morning show.”

The response on Twitter was swift, with some users asking Klein to delete the tweet (he refused), while others criticized him for its inappropriateness. Klein was flippant in some of his initial responses to those critical on social media, although by midmorning Tuesday the tweet was deleted. By midday, Klein issued an apology.

The apology came long after many on social media called for the Padres to address the matter, some suggesting the organization find a new radio station. The team opens the season Thursday against the Milwaukee Brewers at Petco Park.

“We find the comments made last night by Entercom’s employee offensive, insensitive and completely unacceptable. Mental illness and suicide are not joking matters. Additionally, we’ve expressed our concerns to Entercom around the tone and direction of the station they have chosen to create.

“It’s important for our fans to know that our agreement with Entercom to move to 97.3 was an opportunity to expand our pre and postgame coverage and it was done well before we knew the format, the tone or the talent lineup.

“We believe Entercom owes San Diego an apology. And, even though we do not have ultimate control over Entercom’s programming beyond our game broadcasts, we apologize for the behavior of the station.” 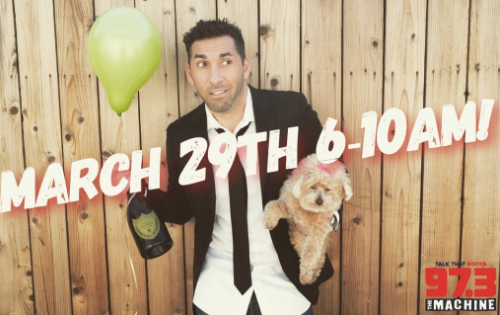 Six hours after the original tweet, two other tweets were sent out with the same text but different photos — one of a local beach scene and the other an overhead coastal shot of the Torrey Pines Golf Course..

Klein’s tweet came the same day as a front page story in the Union-Tribune about the unveiling of Coronado bridge suicide prevention prototypes. According to the article, the Coronado bridge now is the second-deadliest bridge in the United States for suicides..
Posted 3:00:00 AM