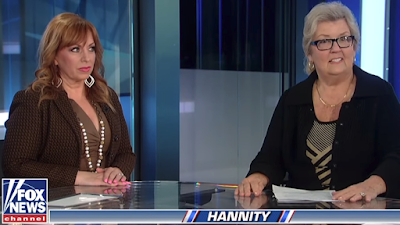 Fox News' Sean Hannity asked Juanita Broaddrick if CNN's Anderson Cooper - who interviewed Daniels for CBS - has called her to hear her own story of alleged sexual misconduct by a president.

Broaddrick said she tweeted at Cooper to ask why he remains silent on her case.

"There's no comparison," fellow Clinton accuser Paula Corbin Jones said of the coverage of the Daniels allegations versus her own and those of Broaddrick.

Jones received a settlement after accusing Clinton of pulling down his pants and exposing himself to her.

Broaddrick said Sean Hannity and former NBC journalist Lisa Myers were some of the very few media personalities interested in hearing her story.

She said Clinton raped her in a hotel room and kept her silent by biting her lip.

Her new book "You'd Better Put Some Ice On That" tells of the incident, and the only words Clinton spoke after the alleged rape before he "put on his sunglasses" and left the room.