Trump Tells CNN's Acosta To Get 'Out' Of Oval Office 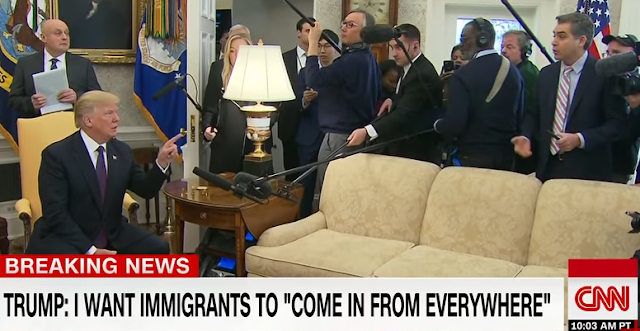 Acosta has made a habit of grandstanding and interrupting when Trump and his surrogates are available to the media. Tuesday was no exception, as Acosta yelled, “Mr. President,” three times before finally getting Trump’s attention.

“I want them to come in from everywhere… everywhere. Thank you very much everybody,” Trump responded as Acosta continued to bark questions.

“Just Caucasian or white countries, sir? Or do you want people to come in from other parts of the world… people of color,” Acosta shouted.

According to The NYPost, Trump then pointed directly at Acosta and simply said, “Out!”

A Trump staffer in the background can be heard saying, “Jim, thank you,” before the CNN star presumably exited the room. Acosta then took to Twitter, accusing White House aides of obstructing him from asking questions.