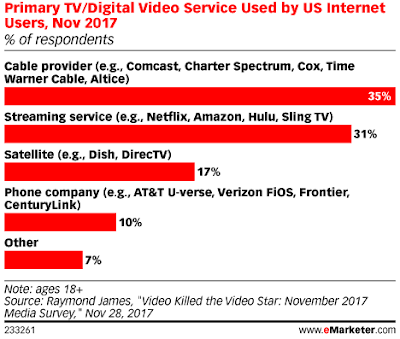 New figures from Raymond James reveal that 31% of internet users polled in November named a streaming service like Netflix or Hulu as their primary method of consuming video content.

That was up from just 24% about a year ago. It was also a scant few percentage points behind the 35% who named cable as their chief means of watching video.

eMarketer reports Raymond James also concluded that consumers are not really eliminating their cable subscriptions as much as "cord-shaving," or reducing their cable packages to so-called skinny bundles that offer fewer channels at a reduced price.

Among the top reasons given by those who retained cable packages for traditional TV service were access to broadcast TV channels, sports content and premium channels.

On the other end, streaming's success can pretty much be summed up in one word—Netflix. Over three-quarters (76%) of respondents named Netflix as one of the services they would pay for if they had to choose just three, based on their current budget.

Netflix's strategy of picking up the back catalogs of content studios at cut-rate prices is long gone, now that it's demonstrated that even decades-old content can still have value in the digital era.