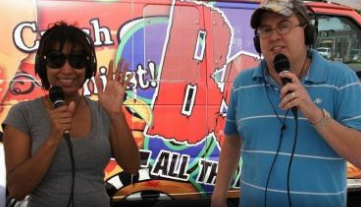 "The Afternoon Swirl," the daily show on New Orleans radio station CHR WEZB B97.1 featuring on-air personalities Stevie G and TPot, has come to an end after 11 years.

Stevie G, whose real name is Steven Guggenheimer, confirmed the news on his personal Facebook page this week, according to nola.com.

He followed that up with posts revealing that he is no longer with the station -- along with taking a few shots at station management -- although it was unclear whether he left on his own accord or if he was let go. Wednesday afternoon (Dec. 6), station management confirmed Guggenheimer's departure and the cancellation of "The Afternoon Swirl," a daily look at pop culture, news and relationships that started in 2006.

TPot, whose real name is Tierza Guggenhemier -- and who this year announced her off-air separation from Steven Guggenheimer, the father of her two children -- is still with the station. Wednesday, she was hosting solo during the old "Afternoon Swirl" time slot.

Earlier in the day, she addressed the end of "The Afternoon Swirl" with a message posted to the B97 website.

"Stevie is my best friend," she wrote. "It has been an honor to do the Afternoon Swirl with him since March 6th 2006. We did our best to help New Orleans heal and rebuild after Katrina with our engagement stories, and we opened our family and our lives up to all of our listeners. He will be greatly missed....even tho I'm gonna see him daily. Our family would love for you to keep us in your prayers as we move into a new phase of our relationship as forever friends and coparents to our two children Natty and Chloe."
Posted 3:41:00 AM