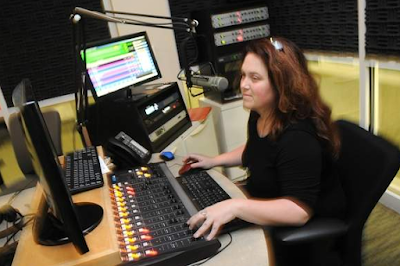 Inside the newsroom of Seacoast Media Group in Portsmouth, NH, a brand-new full-service radio station is prepared to launch, streaming online.

EDGE Radio, which has a home page found at edgestreamingradio.com started Sunday morning, and will feature 24-hour programming that ranges from news and weather to sports, culture and music, focused on New Hampshire’s Seacoast and southern York County in Maine.

Combining forces with SMG’s existing newsroom, EDGE Radio’s creators believe the station is a cutting-edge service the Seacoast will integrate into its daily media routine. The goal is to tap into the same resources that produce the news, sports, arts and culture reporting for the Portsmouth Herald and Foster’s Daily Democrat and generate a well-rounded radio station that serves the Seacoast audience in a new way.

“We’re basically making a radio station that sounds like a newspaper,” said Director of Broadcasting Rob Connelly, who built and organized the station. “It’s pro reporting, pro everything, at our fingertips.”

Howard Altschiller, executive editor of the Portsmouth Herald and Foster’s Daily Democrat, said the station is an exciting new opportunity for the company. He is one of four at SMG whose local news reports will air from 6:05 a.m. to 7 p.m., joined by Foster’s reporter Judi Currie, SMG Digital News Editor Glenn Sabalewski and Foster’s Managing Editor Mary Pat Rowland. The station will also offer local sports reports from the SMG sports staff.

The station will stream 24/7 and feature music programming, too.

Connelly said EDGE Radio is sort of a throwback to full-service radio stations that offered music, news, traffic and weather all in one product. He said stations typically had full news staffs in a time when radio played a more prominent role in communities years ago.