The nation’s TV-news outlets mobilized to cover a tragedy in Orlando in which a shooter opened fire in a nightclub catering to LGBT customers, killing what is estimated to be about 50 people.

According to Variety, Scott Pelley was holding forth on CBS and CBSN, CBS’ live streaming-video news feed, in the late morning. Willie Geist, normally on NBC’s air Sunday to anchor “Sunday Today,” led an NBC News special report that started at 10:16 a.m. eastern and led rolling coverage that continued in the late morning and early afternoon. ABC News also broke into programming Sunday morning to cover the incident.

Fox News Channel pre-empted regular programming Sunday morning, giving the anchor reins to Bret Baier at 11 a.m., rather than running the regularly scheduled program at that time, “MediaBuzz,” a media-analysis program hosted by Howard Kurtz. At CNN, Jake Tapper devoted his political-talk program, “State of the Union,” to coverage of the incident, interviewing national-security analysts and Rep. Pete King, among others. Tapper continued to anchor coverage into the early afternoon. Chris Jansing and Alex Witt were anchoring coverage in the late morning and early afternoon on MSNBC

News networks said they were dispatching more personnel to the area as the story captured wider interest.  CNN said correspondent Boris Sanchez was on location in Orlando, and noted that Victor Blackwell and Pam Brown would anchor coverage from Orlando on Sunday.

Fox News said correspondents Peter Doocy and Steve Harrigan were on the ground in Orlando. Bill Hemmer and Greta Van Susteren were expected to anchor live from the scene on Monday to report on the most current developments. 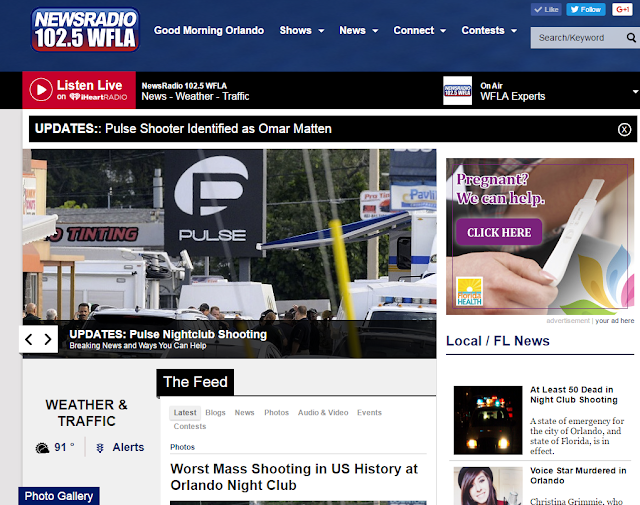 On radio, iHeartmedia's WFLA (WFLF) 540 AM / 102.5 T-FM brought the weekday morning show and started wall-to-wall coverage at 7am Sunday, prempting all brokered programming. The station had two reporters on scene for coverage anchored by Good Morning Orlando cohosts Bud Hedinger and Deborah Roberts.  The statio stayed with continuous coverage until late Sunday.

“Our people got the first word sometime in the 6am hour and our News/Talker WFLA (WFLF) was on at 7am with our whole morning crew: anchor Bud Hedinger and co-hosts Michael Yaffee and Deborah Roberts. I got called not long after that and began firing off calls to all PDs and all cluster Air Talent with an “all hands on deck” message. We flipped the WFLA content onto all stations until their personnel got in. WTKS-FM – Real Radio 104.1 was next to go live with local talent anchored by our three main show captains: Jim Philips of the Philips Phile, Russ Rollins of the Monsters and Shawn Wasson-The News Junkie along with PD Jack Bradshaw and most of their cast members.”

“WXXL’s (XL1067) Johnny’s House with Johnny Magic, Laura Diaz, Brian Grimes, Rae and Marissa signed on about the same time and stayed on all day. The LBGT community is well represented within our Air Talent and so there was poignancy to many of the Talent exchanges. The WRUM (Rumba 100.3) morning show, John Musa and Jenny Castillo got on early and stayed for the whole day. Program Directors Jim Poling (WFLA), Brian Mack (WXXL) and Rick Everett (WJRR & WYGM) personally steered their stations efforts.”

“Most of our on air talent came in as soon as news broke and we went into wall to wall local coverage,” iHeart market manager Linda Byrd said. The cluster’s stations gave out vital information and later took listener calls, while their digital team fed information on social channels. “All promotion personnel were dispatched to help with the huge lines of people wanting to give blood,” Byrd added. “We handed out water and set up tents to provide shade from the heat.” 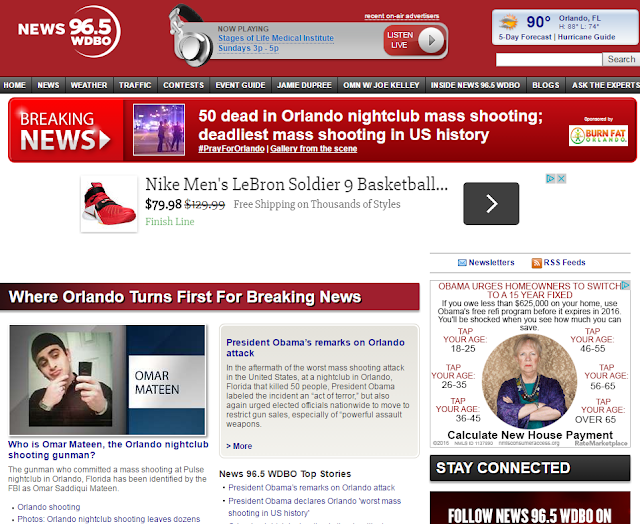 The coverage and support are expected to continue today. Salem Radio Network host Mike Gallagher will originate his nationally-syndicated talk show from studios of Salem's WORL 660 AM The Answer today from 9am-noon eastern.

Brian Kilmeade will be live from Orlando tomorrow morning on Fox & Friends, and WDBO will air all three hours of his syndicated radio show live from 9a-12noon, originating from its studios in Orlando.
Posted 3:56:00 AM