Journalists Hit Back At Obama's 'Lecturing' 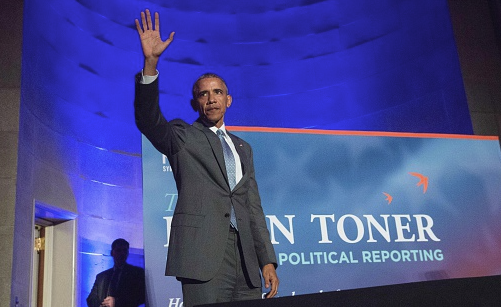 Political reporters and commentators are striking back at President Obama, who delivered a speech Monday night that rapped the news media for what he said was superficial reporting and an unwillingness refute untrue statements from political figures.

At a press-freedom awards ceremony in Washington, Obama said the news media was failing to accurately cover Republican presidential candidate Donald Trump, and that reporters are too hung up on the popularity of their 140-character tweets.

"There's a man lecturing the media on how to do their business," said MSNBC's "Morning Joe" host Joe Scarborough on Tuesday. "The man who has not sat down for an extended interview with the Washington Post in seven and a half years, and yet gladly submits himself to being interviewed by YouTube stars who sit in bathtubs with milk and Fruitloops."

Obama is known for preferring non-traditional media venues to push his administration's view on policy and politics, such as the time he met with YouTube celebrities. The White House has also been criticized for lacking transparency and for delayed responses to Freedom of Information requests.


"Obama selects media with audiences biased in his favor. He perpetuates the problem even as he denounces it." https://t.co/hzVb4bimCF
— Joe Scarborough (@JoeNBC) March 28, 2016


"Any reporter who's dealt with this White house will say it's as frustrating, if not more frustrating, than dealing with past presidents," said Politico CEO Jim VandeHei.

Several reporters said on Twitter that Obama's remarks seemed to be mostly aimed at political coverage that goes against him or Democrats. That point was echoed by liberal Washington Post columnist Eugene Robinson, who said on Morning Joe, "It just drives me nuts, [Obama] lectures us about how to cover Donald Trump, basically."

Other reporters were also taken aback by Obama's criticism of the news media.

"Hey thanks Obama for your chill comments on journalism, maybe tell the FBI to fulfill a FOIA in less than a year while you're at it," said one New Jersey-based reporter on Twitter, following the president's comments.
Posted 3:33:00 AM