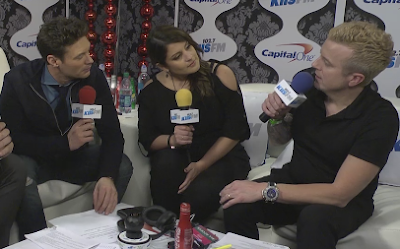 iHeartMedia has announced that well known Los Angeles radio personality Sisanie has been named the new co-host of "On Air with Ryan Seacrest," effective immediately.

Friday evening, onstage at 102.7 KIIS FM's Jingle Ball 2015 Presented by Capital One, Ryan Seacrest made the announcement and Sisanie joined him onstage to make their first official appearance together as co-hosts. "On Air with Ryan Seacrest" broadcasts on L.A.’s No. 1 Hit Music Station - 102.7 KIIS-FM — on weekday mornings and is syndicated on 170 stations worldwide. She will also continue to serve as Music Coordinator for KIIS-FM.

"I was lucky to have such a talented co-host in Ellen-K for the last 11 years, and she’s irreplaceable in so many ways,” said Ryan Seacrest, Host and Executive Producer.

"Sisanie has dedicated her career to being a top radio on-air talent. She’s worked so hard and, and no matter what job they put her in at KIIS-FM over the last decade, she did it great, and with a smile. Her skill, passion and persistence have paid off in spades. She's from Orange County and has grown up listening to KIIS-FM. Like me, she fell in love with radio when she was young, and really has never looked back. I’m excited that she is joining the show as co-host, because frankly, I can’t think of anyone more qualified or who has more passion for radio and our show than Sisanie."

Sisanie previously hosted her own midday show on KIIS-FM for the past 8 years and also broadcasted a midday show for KHTS-Channel 93.3, San Diego’s Hit Music Station, during that time. In addition, Sisanie has had her own national show, which was heard on more than 60 CHR radio stations including major markets such as Y100 in Miami.

Born in Orange County, the bilingual, Mexican/Peruvian beauty discovered her passion for broadcasting in high school. Sisanie was only 19 years old when she started interning for iHeartMedia. She was honored by Edison Media Research in 2008 as one of its “30 under 30” after a nationwide search for 30 young bright individuals with promising careers in the radio industry. Sisanie was also the announcer for the 2014 and 2015 iHeartRadio Ultimate Pool Party which was nationally televised on The CW network, and, earlier this year, co-hosted LIVE From the Grammy Red Carpet for KTLA 5.


I went from an intern to my dream job! It took many years and I wouldn't change any one of them! Love all of you! https://t.co/usKcMAbDXk
— SISANIE® (@Sisanie) December 5, 2015


"I grew up listening to KIIS-FM, so to be given this opportunity means everything! This is home and it’s an honor to work with the best in the industry. Thank you John Ivey and Ryan Seacrest for believing in me," said Sisanie. “I also want to thank Joe Haze and iHeartMedia San Diego for giving me my first internship which ultimately led me to my dream job!"
Posted 3:59:00 AM