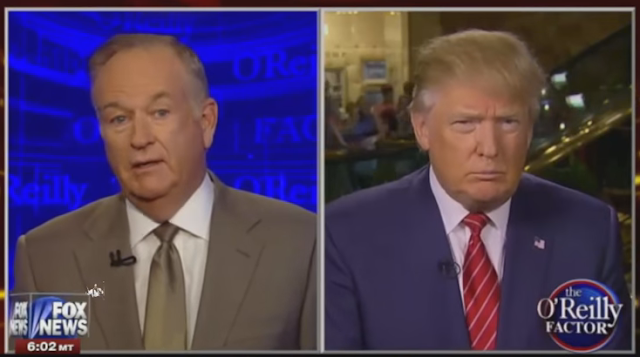 Bill O’Reilly confronted Donald Trump tonight over his 9/11 “cheering” claim after he fact-checked it and found insufficient evidence to back him up, reports Mediaite.

There was one local WCBS-TV2 news report about individuals in New Jersey cheering that was flagged by authorities, but O’Reilly told Trump there’s nothing to bolster “thousands.” He told Trump that was “wrong,” but said of course celebrations did occur.


Trump repeatedly defended himself by citing a Breitbart article declaring Trump to be “100% vindicated.” That article says based on one line in a news report about an apartment building “swarming with suspects,” combined with a few other reports, you can easily get to the “thousands” Trump claimed (the writer of that piece apologized for initially doubting Trump).

O’Reilly again told Trump it was only “some people, not thousands.” Trump said “you don’t know that,” and O’Reilly shot back, “I’m pretty confident.”
Posted 3:12:00 AM