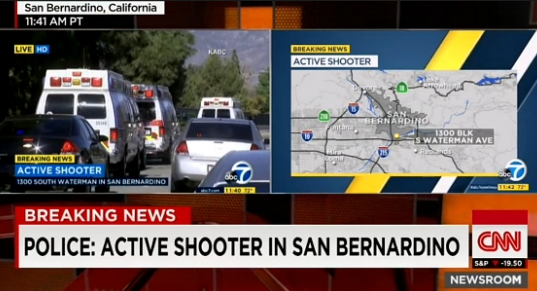 Dressed in black masks and tactical gear, armed with long guns and pistols, a man and woman entered a holiday party for county health workers in San Bernardino as it was in full swing. Before they fled, they had killed 14 people and wounded 17 others. They led police on a manhunt that left the shooters dead.

"They looked as if they were on a mission," authorities said.

Chief Jarrod Burguan of the San Bernardino PD identified the two suspects as Syed Rizwan Farook, 28, and Tashween Malik, 27. Ge was born in the U.S.  Farook, an environmental inspector, had been employed with the county health dept for five years. Wednesday morning he attended a holiday party for the dept at the Inland Regional Center which provides services for thousands of people with disabilities. He left "angry" after a dispute of some sort, the chief said, and returned with Malik around 11 am heavily armed. 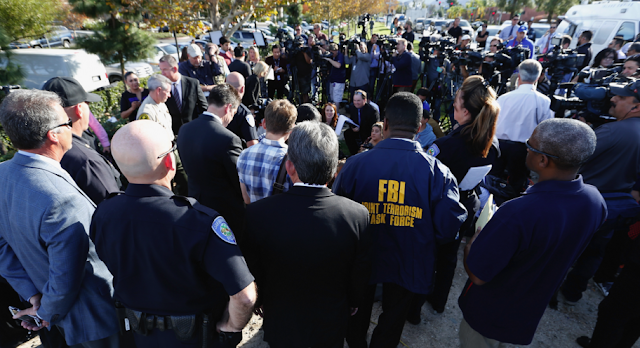 "There had to be some degree of planning that went into this," Burguan said. "I don't think they just ran home and put on these tactical clothes." "We have not ruled out terrorism." The couple were armed with .223-caliber assault rifles and semiautomatic handguns - four guns were recovered from the scene. Police have determined that two were bought legally.

CNN first reported the story at 2:29 p.m. ET, with Brooke Baldwin. Fox News pre-empted its 2 p.m. program to provide live breaking news coverage with Shepard Smith from the Fox News Deck. MSNBC reported the mass shooting at 2:32 p.m. ET with Thomas Roberts–breaking news anchor Brian Williams was not part of the network’s coverage, as he’s at home, recovering from back surgery.
Posted 6:13:00 AM