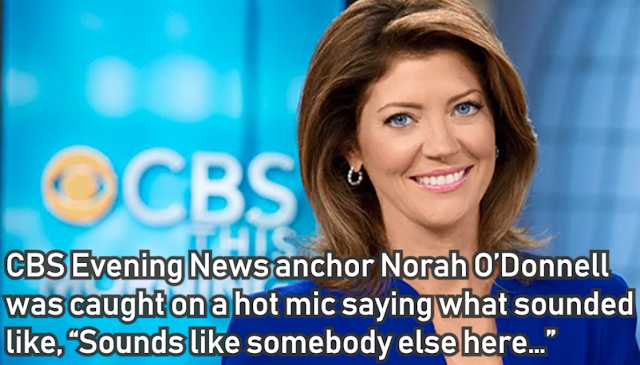 During a Tuesday night segment on the sexual harassment accusations against opera star Placido Domingo, CBS Evening News anchor Norah O’Donnell was caught on a hot mic saying what sounded like, “Sounds like somebody else here…”

According to The Wrap, O’Donnell was overheard during a portion of the report in which Domingo said he believed all relationships in his past were consensual. But her comment was scrubbed from the audio when the clip was uploaded to the CBS website.

CBS has faced plenty of scrutiny during the #MeToo era. O’Donnell’s former “CBS This Morning” co-anchor Charlie Rose was dropped by the network in 2017  after multiple women accused him of sexual misconduct.

In 2018, while still on “CBS This Morning.” O’Donnell addressed the forced resignation of network CEO Les Moonves, which came after multiple women accused the media mogul of sexual harassment or assault.

She said Moonves had always treated her “fairly and with respect,” but she’d had “another sleepless night” thinking about the accusations against him.
Posted 2:26:00 AM