Republicans Most Likely To Care About Seasonal Greeting 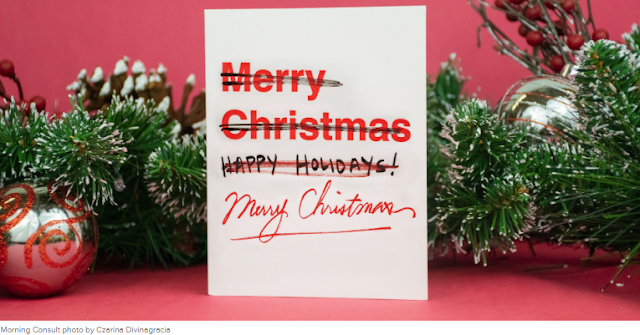 Winter is coming, and with it return the ubiquitous battle lines of what has become a cultural and political conflict in the 21st century: the so-called “War on Christmas.”

New analysis reinforces the idea that it’s mostly just one political party that believes there is an intentional effort to remove the religious elements of Christmas from the public sphere: Republicans. The GOP’s identity strongly overlaps with attitudes about the holiday spirit and concerns about political correctness in the United States, according to Morning Consult polling.

In a Nov. 1-3 Morning Consult survey among 2,201 U.S. adults, respondents who said they believe there is “too much political correctness” and also said that would shop more at stores that say “Merry Christmas” were more than three times as likely to identify as Republican than as Democrat, 41 percent to 12 percent. 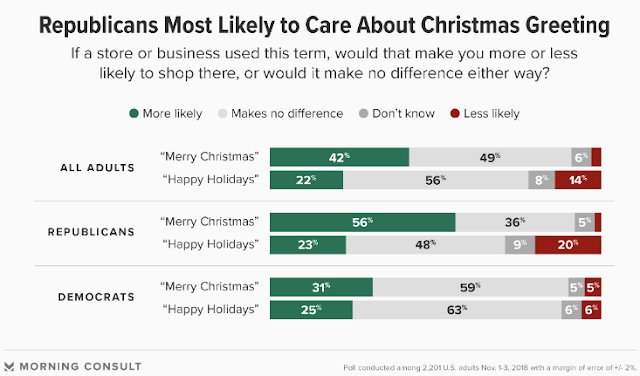 “The issue of ‘War on Christmas’ seems like asymmetrical warfare, in that only one side seems to be fighting it,” said Dan Cox, an independent pollster and former research director and co-founder of the nonpartisan polling firm PRRI.

President Donald Trump made the issue of political correctness a consistent talking point throughout his presidential campaign, with other Republican candidates also taking up the mantle — including Governor-elect Brian Kemp of Georgia, who went as far as to call himself a “politically incorrect conservative” in 2018 midterm election ads.

The survey, which has a margin of error of 2 percentage points, shows most adults don’t have strong opinions over the use of “Merry Christmas” or “Happy Holidays” as December greetings, a binary that’s key to the so-called holiday war.

Cox said the “War on Christmas” has never really been over the use of the phrase “Merry Christmas,” but more about the message behind it — namely, perceived cultural changes tied to race and religion, as well as Christianity’s slipping dominance in popular culture.
Posted 12:50:00 PM