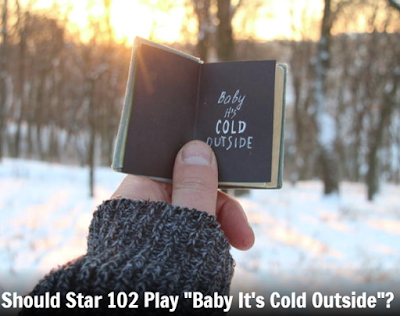 Entercom's WDOK Star 102.1 FM has stopped playing “Baby It's Cold Outside" this holiday season after it says listeners voiced concern about the song’s predatory undertones amid the “Me Too” movement.

WDOK pulled the song from its around-the-clock rotation of Christmas music this week after receiving a call from a listener who suggested it is inappropriate in 2018.

The call-and-response song written in the 1940s includes a woman singing that she has to leave a man’s house as he tries to lure her to stay.

In the song, the female sings “I really can’t stay,” to which the man responds, “but baby, it’s cold outside.”

Other lyrics include the woman singing “say, what’s in this drink?” and “I simply must go… the answer is no.”

The station posted a poll about the song on its website.

Poll results were not visible on the station's website. However, a poll on the station's Facebook page showed that among more than 2,000 votes by Friday noon, 94% of respondents favored playing the song while just 6% felt it was inappropriate.

“People might say, ‘oh, enough with that #MeToo,’ but if you really put that aside and listen to the lyrics, it's not something I would want my daughter to be in that kind of a situation,” Desiray said. “The tune might be catchy, but let's maybe not promote that sort of an idea.”
Posted 12:55:00 PM